Half-Heusler (HH) phases MTX, where M denotes alkaline-earth metal, early transition metal, or rare-earth element, T stands for late transition metal, and X corresponds to p-electron element, are known to crystallize with cubic MgAgAs-type crystal structure (space group F-43m, no 216). Since several years, they have been widely investigated from the perspectives of strong electronic correlations, magnetic orderings, superconductivity, halfmetallicity, semiconductivity, giant magnetoresistance, and/or thermoelectricity [1]. Due to their unique multifunctionality, HH phases are often called “compounds with properties on request” [2]. Most recently, attention of the scientific community turned towards investigation of disorder in this group of materials, as it appears a vitally important factor that governs the charge and heat transport properties.

In collaboration of three CMetAC partner institutions, the HH compound ScNiSb has been thoroughly studied for its structural and physical characteristics. The research team from the Max Planck Institute for Chemical Physics of Solids in Dresden performed state-of-the-art X-ray diffraction experiment in Guinier geometry. As a result they noticed appearance of structural complexity in a relatively simple basic atomic arrangement through peculiar type of atom disorder. Namely, Ni atoms in ScNiSb were found off-centered from their nominal 4c(¼ ¼ ¼) position to quarterly occupied 16e(xxx) site with x = 0.256(2). This finding is at variance with the most commonly observed structural defects in the HH compounds, viz. the presence of M 4b(½ ½ ½) and X 4a(000) antisites, or T atoms partially occupying nominally empty 4d(¾ ¾ ¾) position.

The partners from the Institute of Low Temperature and Structure Research in Wrocław and the Institute of Molecular Physics in Poznań, have examined the electronic transport in ScNiSb. They established that the material investigated is intrinsically a p-type semiconductor with fairly enhanced thermoelectric power at elevated temperatures, attaining 240 μVK-1 at 450 K. However, the electrical resistivity of ScNiSb appeared also rather large, being of about 90 μΩm near 450 K, and hence the thermoelectric power factor of this material was found to be smaller than 1 mWK-2m-1 (observed near 600 K), and the thermoelectric figure of merit did not exceed 0.1 (at 810 K). Nevertheless, the CMetAC team has predicted for ScNiSb decent thermoelectric performance at high temperatures, if only the carrier concentration could be tuned towards degenerate-semiconductor behavior. 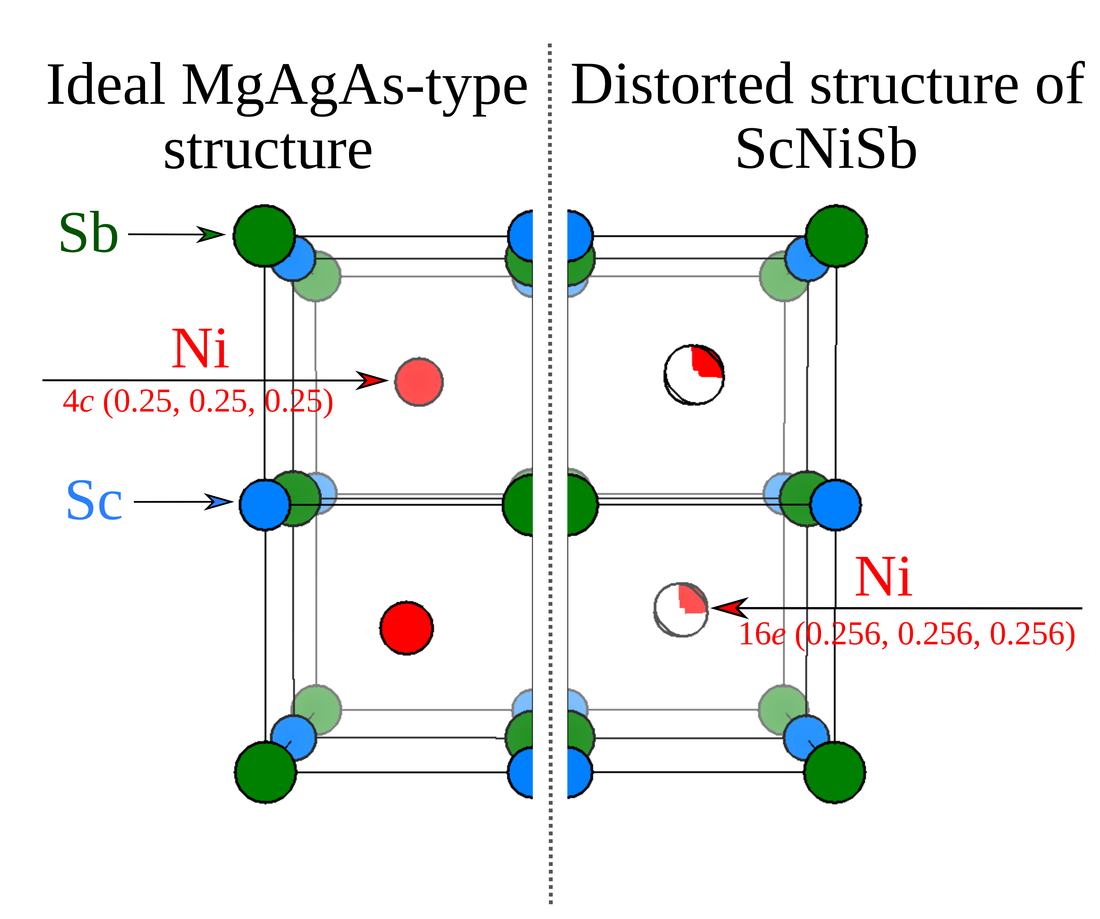